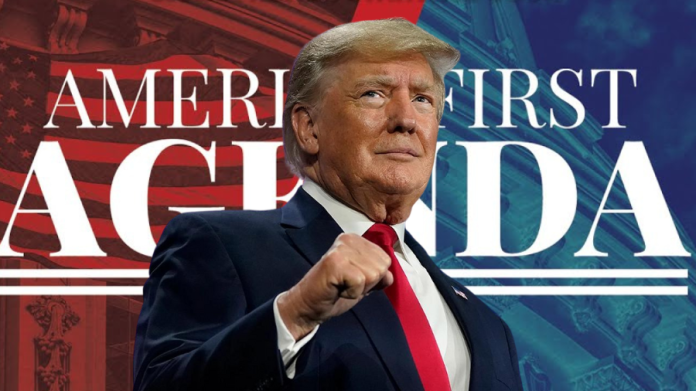 On Tuesday, former president Donald Trump outlined a strict and hardlined criminal justice agenda for the Republican Party at the America First Agenda Summit in Washington DC. He praised China’s legal system, pushed for the execution of drug dealers, and argued that the federal government should bypass governors to use the National Guard to fight crime.

The former President praised the police, at one point referring to them as his heroes. Trump also stated that the nation must “let them do it,” adding that “our wonderful cops know what to do.”

The House Select Committee looking into the incident, which has been holding high-profile hearings for weeks, was referred to by Trump as the “unselect committee of political hacks and thugs.” He also rained hellfire upon the Republicans on the committee, Reps. Liz Cheney of Wyoming and Adam Kinzinger of Illinois. He said that the committee “truly wants to harm me so I can no longer go back to work for you.”

It was initially speculated that a lot of what his speech turns out to be would rely on the man’s temperament and how he feels. On Monday, there were roughly 600 individuals inside the premises, including former members of the Trump administration who hugged, shook hands, and laughed heartily with one another.

Trump has not returned to Washington in 18 months after moving to Florida in the wake of a setback in the 2020 presidential election that he refused to acknowledge and the outrage from a mob who stormed the Capitol in his honor.

A longtime aide to the previous president Bruce LeVell declared, “I say he never left: his spirit’s here.” LeVell, who has advised Trump since his announcement in 2015 during his first campaign, predicted a 2024 announcement, saying it would come “quicker than you probably think.”

True believers organized the Trump event. The platform of America First Agenda Summit covers a wide range of topics, from boosting the economy to making it “easy to vote and hard to cheat,” a subtly ironic reference to Trump’s accusations that the election was rigged. According to Institute spokesman Marc Lotter, they had anticipated the former president’s presentation to draw about 1,200 attendees.

Other Conservative dignitaries in attendance at the America First Agenda Summit

Former members of the Trump administration, such as Brooke Rollins, president and CEO of the America First Policy Institute, Kellyanne Conway, a former senior adviser to the president, Rick Perry, a former energy secretary, and Matt Whitaker, a former acting attorney general, engaged in a lively discussion with attendees.

Attendees included conservative firebrand Kathy Barnette, who ran an oppositional campaign for the Republican nomination in Pennsylvania‘s contest for US Senate. She had not received Trump’s support, adding a distinct element to the equation.

In his keynote address on Tuesday, former President Trump hinted at a third presidential run while telling his supporters that attempts to remove him from office and look into the attack on the Capitol on January 6, 2021, are meant to harm them.

“They want to damage you in any form, but they really want to damage me so I can no longer go back to work for you, and I don’t think that’s going to happen,” he said to the crowd, which showed its support with chants of “four more years!”

According to news reports, the former president is considering announcing a third presidential run as early as September.

Trump hinted throughout the address that he doesn’t intend to disappear into political obscurity, even though he didn’t make an official announcement. Instead, he claimed that despite what he called “persecution” from House Speaker Nancy Pelosi (D-San Francisco) and the select committee looking into the Capitol uprising on January 6, he felt compelled to continue participating.

“If I stayed at home and just took it easy, the persecution of Donald Trump would stop immediately,” he said. “But that’s not what I will do. … I have to save our country.”

Trump mocked Rep. Adam B. Schiff (D-Burbank), dubbed the House Jan. 6 committee a gang of “thugs” and “hacks,” and reiterated that he won the 2020 presidential election during the speech, which began as a policy address on crime.

“I always say I ran the first time, and I won. And then I ran a second time, and I did much better,” he said. “What a disgrace it was. But we may just have to do it again.”